Redshift is arguably the most important concept in astronomy.

Quite simply, it means that some light, for some reason, acquires a longer wavelength, and that the light hence is shifted toward the red end of the spectrum.

Usually the reason is that the emitter and the receiver are moving away from each other. But in astronomy the reason can also be that the Universe expands, or because the light is emitted from a region of strong gravity.

Go to the encyclopedia

Motion changes the wavelength of light

When a shining object — e.g. a star or a flashlight — is moving toward us, the wavelength of the light gets shorter and will hence be shifted toward the blue end of the spectrum. Conversely, if the source is moving away from us, the wavelength gets longer, and hence redder.

In the first case the light is said the be blueshifted, in the second it's redshifted. In both cases, the reason is the Doppler effect.

The terms describe the "direction" of the shift; if light if shifted from, say, ultraviolet to blue, or from red to infrared, we still say that it has been redshifted, even though the "final" wavelength is not red.

An analogous effect is met when the sirene from an ambulance approaching us sounds more high-pitched, while it's more low-pitched when it recedes again. For light, however, the cause is fundamentally different, and is described by the theory of relativity.

From lab experiments we know at which wavelengths the different elements emit light. By measuring how much the light from a distant object has been shifted, we can (very accurately) calculate how fast it moves.

The best spectrographs can measure the speed of stars many light-years away with an accuracy of 1 m/s. 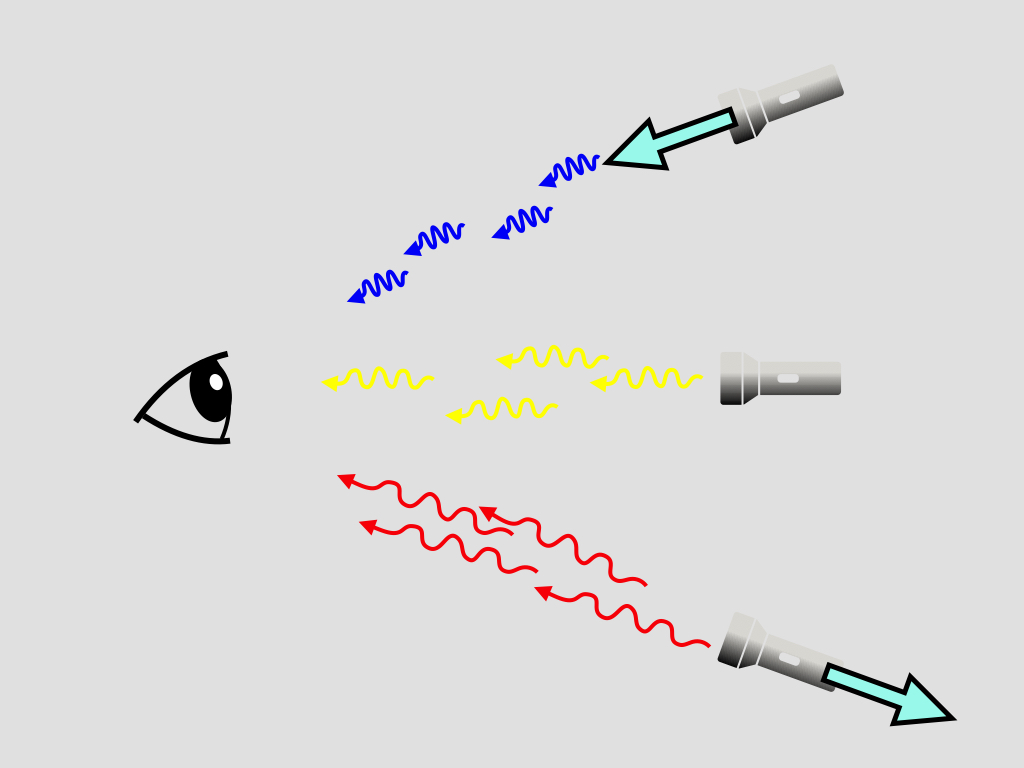 Doppler effect: The wavelength of light from an object approaching us (receding from us) is sqeezed (stretched), and is hence shifted toward the blue (red) end of the spectrum. 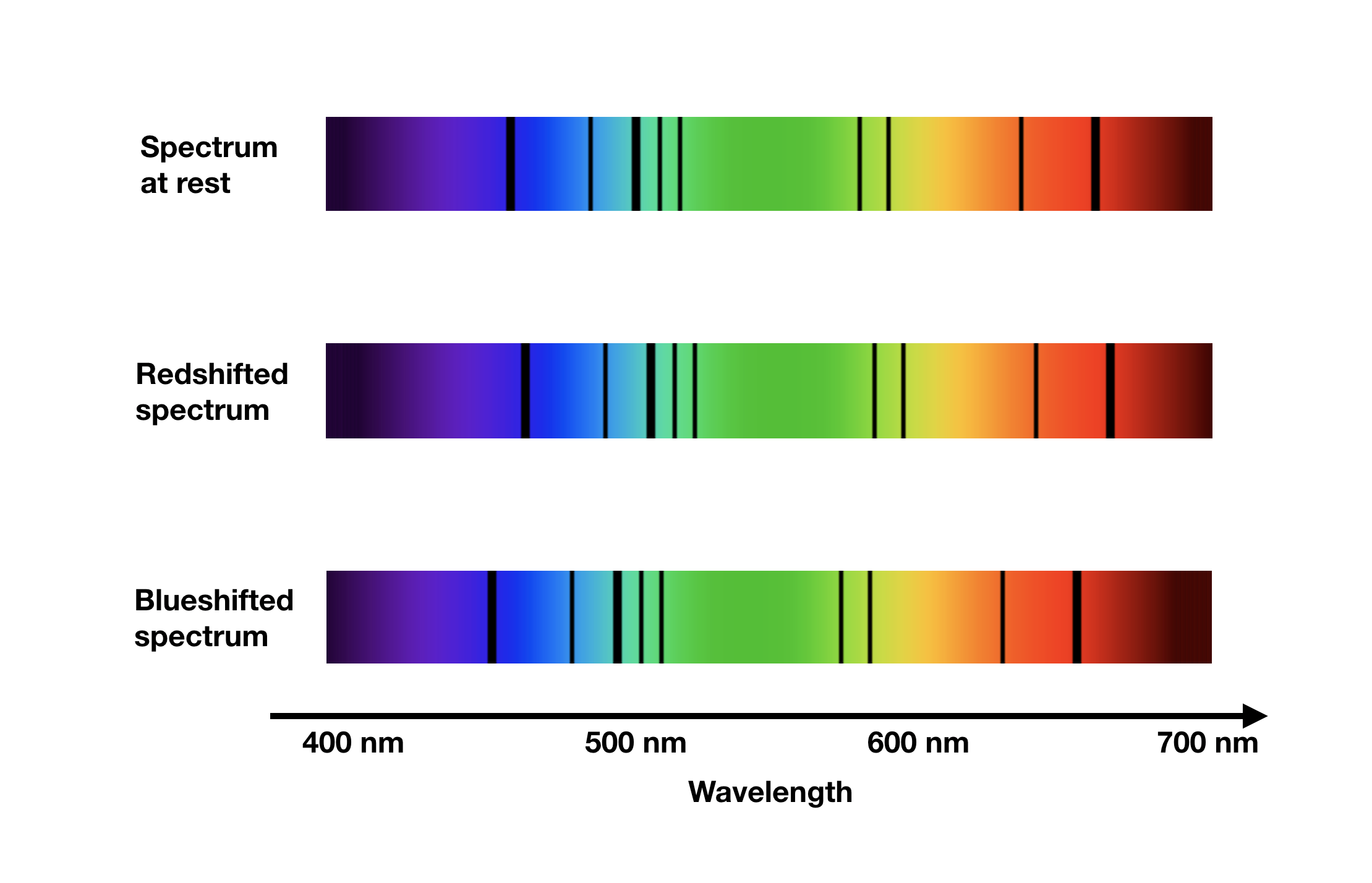 Doppler-shifted spectra: The spectrum of a star at rest (top) and, respectively, red- and blueshifted by approximately 5 nm, corresponding to some stars receding/approaching us at roughly 1% of the speed of light (stars in our own galaxy don't usually move that fast).
The black lines are absorption at specific wavelengths in the stellar atmosferes.

Hence, the farther two galaxies are from each other, the faster they recede from each other. Because the galaxies lie still in space, there is no Doppler shift involved (well, actually they do move around with a few 100 km/s, so there is an additional Doppler shift, but let's ignore that for now). But a prediction of Einstein's general theory of relativity is that space may expand, and that light traveling through an expanding space has its wavelength "stretched", proportionally to the expansion.

Because light is redshifted more and more on its way through space, we can use galaxy's redshift as a measure of its distance.

And since light doesn't travel infinitely fast, but took some time to reach us, we look further back in time the farther a galaxy is away. Thus, at the same time a galaxy's redshift is a measure of the age of the Universe at the time we see the galaxy. 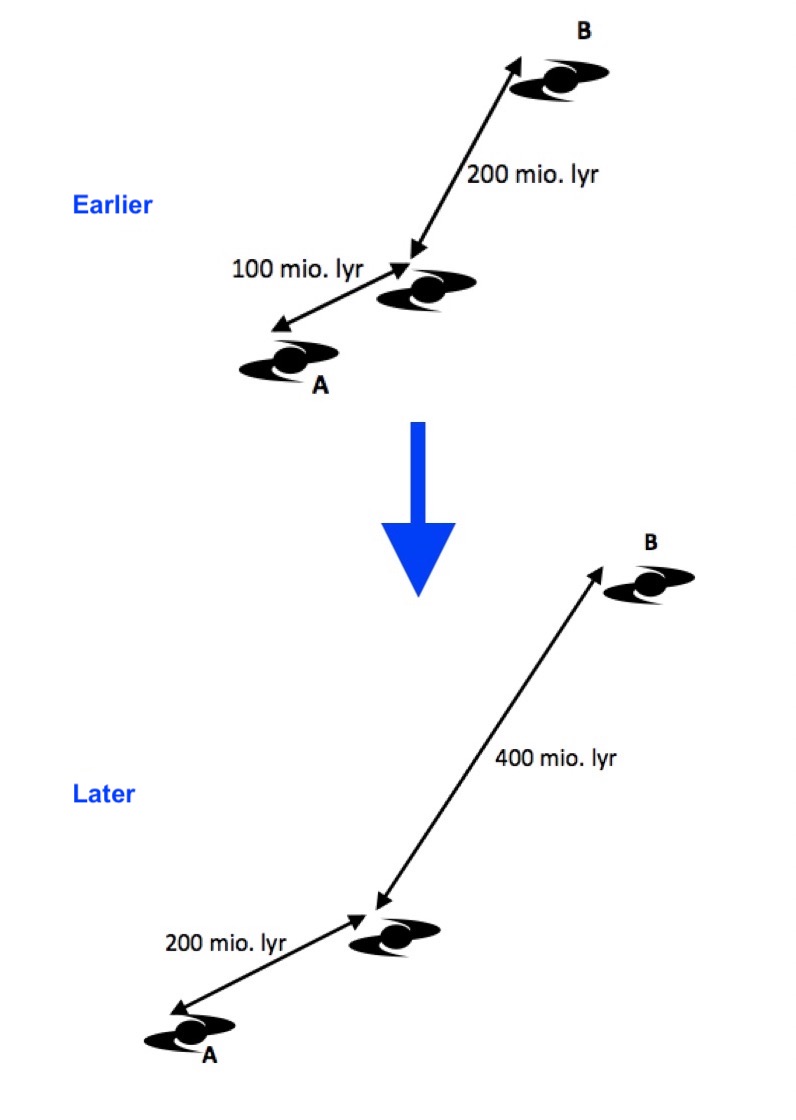 Cosmological redshift: Galaxies in an expanding Universe recede from each other, faster and faster, and with a velocity increasing with their mutual distance. Galaxy B is twice as far from the middle galaxy as galaxy A, and hence recedes twice as fast.

The third way that light may be redshifted is by gravity itself, causing the light to lose energy. In order to move away from an object ("crawl up the potential well"), the light must move between different reference frames. We can say that it must spend energy to overcome gravity, and when the energy of light decreases, its wavelength increases.

This effect, described by general relativity, is usually much smaller than the Doppler effect. For instance, light from our Sun is redshifted by roughly a millionth, but for small, compact objects such as white dwarves it's some 1/10,000, and for light emitter from the surface of a black hole the redshift is infinitely large, so light loses all its energy and hence doesn't escape. 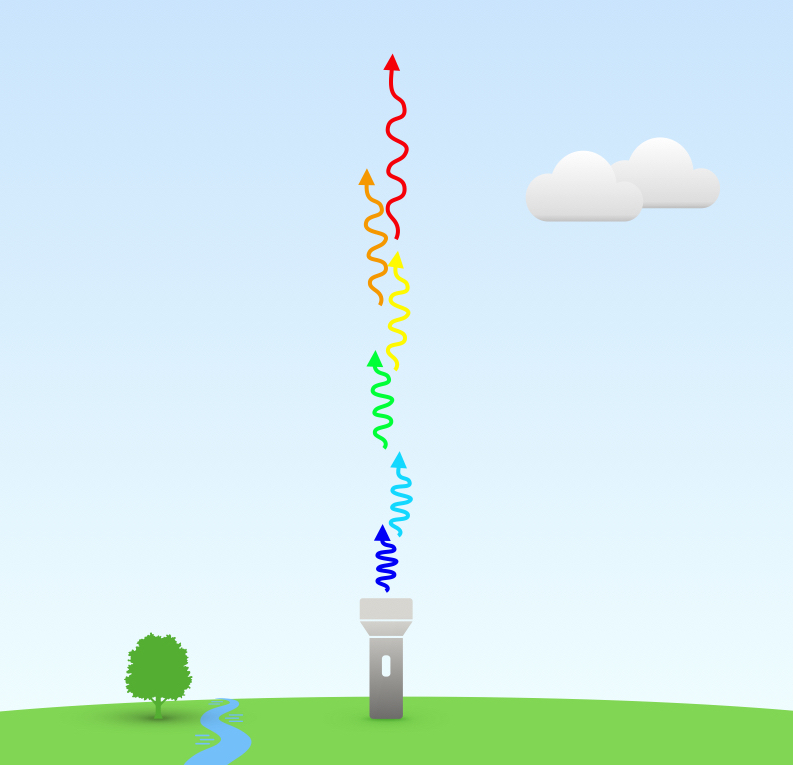 Gravitational redhsift: Photons emitted from a light source at ground level are redshifted as they recede from Earth. The effect is extremely small for Earth, but can still be measured, and for stars which are much heavier, the effect is larger.

The redshift \(z\) increases with the expansion; if the size of the Universe was a fraction \(a\) when the light was emitted, compared to today, then the light we receive today will have a redshift given by $$ z+1 = \frac{1}{a}. $$ For small velocities compared to light (\(v \lesssim 0.01c\)) — i.e. for nearby galaxies — the redshift is roughly proportional to the velocity (\(z \simeq v/c\), so if you measure a galaxy's redshift you can calculate its distance to be $$ d = \frac{cz}{H_0}. $$ For more distant galaxies you must take into account the fact the the expansion velocity has changed during the journey, so it becomes somewhat more complicated.

If you speak Pythonic, you can do it with astropy:

Not a lot, but nevertheless enough to be measured.