Here are some pretty pictures I took, mostly while observing with the "Danish 1.5 meter" telescope at La Silla, Chile, or the 2.5 meter Nordic Optical Telescope at Roque de los Muchachos, La Palma, but also other telescopes and a few with my camera.

Click an image to see the full image [] or read a bit about the object []. In the bottom of the page you can read about how astronomical images are taken.

The three first are my favorites :)

How are astronomical images taken?

In principle, an image is taken as with a regular camera; however, whereas the light detector in a regular camera has three different types of pixels — sensitive to the colors red (R), green (G) and blue (B) to mimic the eyes' cone cells — cameras in telescopes are sensitive to all photons (in a limited range), and images are hence "black & white".

Usually, astronomers are interested in how much an object emits in a given wavelength range, so before taking an image, a filter is placed in front of the camera. To make pretty color images, three images taken with three different filters are then combined. 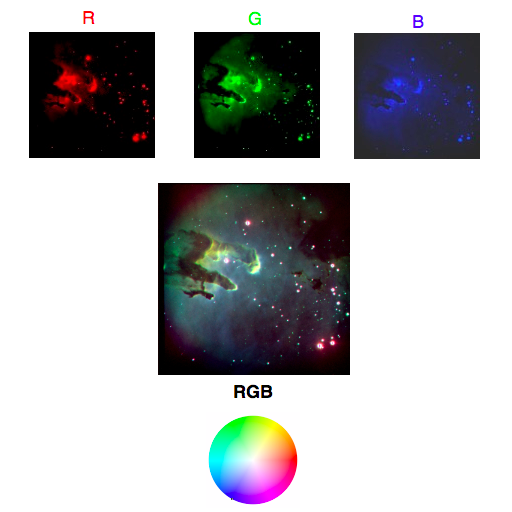 Take me back to the top of the page.